What is this big fuss about? Well, it’s about delivering the final results of hard work of lots of people to editorial, which is like giving meaning to the efforts of the whole team. No more than that.

Planning a perfect workflow is ensuring the transfer of the raw, unedited footage, called “Dailies” or “Rushes” from set to the laboratory and editorial.

So, let’s deconstruct the dailies workflow to understand all the steps and their importance in the process of bringing a show to the screen.

It is crucial to establish a very clear plan, to put in common all the necessary steps, involving Sound and Camera crew, DIT and Data Wrangler, Production, Laboratory and Editorial people.

You can read here how a production person lives this process. Please keep in mind that the author of this humble article knows enough about the dailies workflow to understand what’s going on and why, but most likely it won’t be the most orthodox tech you can find about this subject.

There are plenty of decisions to be made before the camera starts rolling, regarding formats, capture codec, colour grading, transcoding, quality controls, etc. that will shape the workflow.

1. Film vs digital: Once upon a time, the movies were shot using machines that would take 24 photographs every second and leave a negative print of those images on a filmstrip…., yes my dear…, obviously shooting on film or shooting on digital changes the dailies workflow substantially, so we will just focus on digital.

2. Cameras, formats and settings: the workflow depends largely on the aspects detailed below. These will determine the weight of the footage delivered every day, influencing the hardware necessary to process the footage (DIT station, hard drives) and the time dedicated for DIT and laboratory processes. What should be bore in mind?

3. Slating: proper identification of the shot Scene numbers, Set-ups and Takes brings peace and order to editing and other post-production processes. Additionally, the camera should be identified (like A-camera, B-camera in a multi-camera unit, or X-for an additional one, i.e.: drone or underwater). There may be special coding to identify, for example, sex scenes.

4. LUT: colour correction preset. Cameras record the raw footage, that, being sincere does not look too great. That is why the DOP will choose a LUT to make the footage instantly look more natural, closer to the definitive tone.

5. Sound: similar decisions must be taken sound-wise, regarding frame rate, sample rate, time codes, file types and other. It’s important all these details are agreed with the camera, editorial and the lab.

Shaping your dailies workflow consists in deciding all the steps between the director shouts “cut” and the editor begins to work.

There are many ways to organise this workflow, and the main difference consists of how much work is done on Set and what part is processed in the Digital Laboratory.The producers will design this process to find a perfect balance between the creative criteria, security, the agility and, of course, the budget.

1. Mobile Digi-Lab workflow: It is a proper mobile laboratory travelling with the shooting unit and processing the dailies “on-the-go”. In such a case, a DIT or Data Wrangler will make just one backup of the camera and sound cards on Set and then send the original cards to the Digi-Lab for all the processes. No transcoding, nor major colour grading is performed on set, all these processes are carried on in the mobile lab. Still, some eventual colour correction can be performed on set by the DIT following the DOP instructions.

Mobile Digi Lab can probably provide the higher speed of the deliverables and lots of security but it is also the most expensive solution.

2. DIT oriented workflow: In this case, quite a few processes are performed by the DIT or Data Wrangler directly on Set. They will make all the backup copies of the footage, transcode the files, prepare the daily files for Editorial and dailies for Producers, Director and DOP’s screenings.

This method can give you great agility but is also probably the least safe one, since there is a huge amount of work to be performed on set while shooting and after wrap. Bearing in mind that the location cannot be closed and the genny switched off until the DIT processes are completed.

It is probably the most secure option, but it also produces certain delays in the deliverables workflow, basically due the shuttle time of the hard drives from the shooting location to the laboratory.

Let’s have a closer look at these arrangements.

It all starts with very small but very precious items: camera and sound cards, plenty of them. And here is how the picture travels from the Set through the Editorial to a Screen.

1. Camera cards backup: It is important the cards are backed up immediately after removed from the camera, both for security and efficiency reasons. Data Wrangler or DIT makes multiple copies immediately so ideally there are no cards accumulated to be downloaded after wrap. It should be verified with special software, for so-called checksum to make sure that all the raw rushes have been correctly copied from the card.

2. Dailies: All the footage filmed during the shooting day should be copied on 3 different hard drives:

High-performance drives are required for Master and Backup copies to ensure quick and safe copies, Raid system is highly recommended, as well as the fastest transfer connections (i.e.: thunderbolt 3).

The number of drives required is calculated depending on the camera specifications mentioned above and the average estimated footage shot daily. DITs will provide the number of the hard drives required for the shoot. Here is an example: 1,5 TB / day for 2 cameras (i.e.: Sony Venice) in 4K, 25 fps and X-OCN ST Codec.

Usually, to comply with the studio security and insurance requirements, the drives should be filled up to 80% of their capacity. This is an important detail to bear in mind when calculated the number of hard drives required for the show.

All camera and DIT material should be accompanied with relevant paperwork:

3. Hard drive storage: It is crucial to keep the 3 copies (Master, Backup and Transit) separated, so as we mentioned before Master is kept in DIT truck, Backup is stored by Production and Transit is sent to the laboratory for further processing and backups.

The hard drive should be always sent with the camera and DIT reports, so the Lab is able to check all the slated material properly.

Sometimes, when shooting on faraway locations, the rushes may be split at lunch break. Split Rushes means that The Rushes Runner travels to the Laboratory with the footage from 2 shooting days: (sometimes it may require a round-trip flight) with rushes from half of the previous day (afternoon footage) and a half of the present day (morning footage).

When the new Transit Drive is delivered to the laboratory, the Rushes Runner should collect the hard drive left there the day before, to be returned to the DIT.

6. Check and Quality Control: The laboratory technician should check all the slated material and run the Quality Control. Then the QC reports must be sent to Production, Camera and Editorial departments.

7. LUT: The colour correction preset agreed with the DOP is applied to the footage.

8. Sound Sync: Syncing the audio and video together is necessary for editorial work and dailies generation. As I mentioned before, this process can be also handled on Set by the DIT.

9. Transcoding: Usually the files, as they come out of the camera are impossible to be played on a normal computer, it is actually hard even for the DIT station. So before the dailies are distributed and sent to the Editorial they have to be transcoded. Transcoding is converting the files from one Codec to another. Again, it gets a bit complicated here, as the Editors work with one Codec and the Director and Producers will need a different one to review the dailies. This means that 2 different sets of files have to be created, one for editorial and another for reviewing purposes.

10. Editorial daily files: once the footage is copied, transcoded and the sound synchronised the files are created for the Editorial. It is crucial the naming and other settings are agreed in advance with the Editor and Production. These files are usually delivered to Editorial by a secure and high-speed data transfer (i.e.: Aspera), so a fast internet connection is crucial for Editorial facilities.

11. Screening rushes: similarly, the screening dailies are created and sent to Editorial for further distribution. As a matter of fact, some cameras can create 2 types of files simultaneously. One is obviously the raw footage and then there are the so-called proxy files that can be an excellent choice for dailies, saving plenty of time.

12. LTO backups: the LTO tapes are commonly used for additional backups delivered to the studio or parent production company, being a very stable and inexpensive storage device.

The Internet connection is something to take care of when installing the editorial suite. They will definitely need a fast-speed internet and it’s highly recommended checking it before the shooting starts. So, if your Editors need to download files from the Lab and then upload Pix or Frame.io dailies, test your internet for both upload and download, in case you need to change the provider, upgrade the connection or even adjust the dailies’ resolution to make the workflow fluid and avoid the delayed dailies’ drama.

14. Screening rushes distribution: the Assistant Editor creates the screening dailies for the Producers, Director, DOP and other designated crew members. They should be distributed through a secure screening platform, such as Pix, Frame.io or similar.

15. Assemblies distribution: occasionally, the Editors can roughly assemble the shot scenes and setups in narrative order, to be distributed to Producers, Director and other selected crew members.

It has already been quite a long workflow trip, and there’s still so much to consider, like files naming, hard drive and cards labelling, metadata, etc.

Shaping a perfect workflow is finding a well-balanced crossroad between the DOP requirements, the Editors needs and the Production conditions, including studio or platform tech and security specifications. There’s a lot of talk about between these departments, involving DIT, Lab and Sound people. A good Post-production Supervisor is a treasure you will extremely cherish at this point.

So, from the production point of view, there’s a lot of arrangements, agreements and compromises to be achieved:

This graphic may help you to organise all these puzzles in your head: 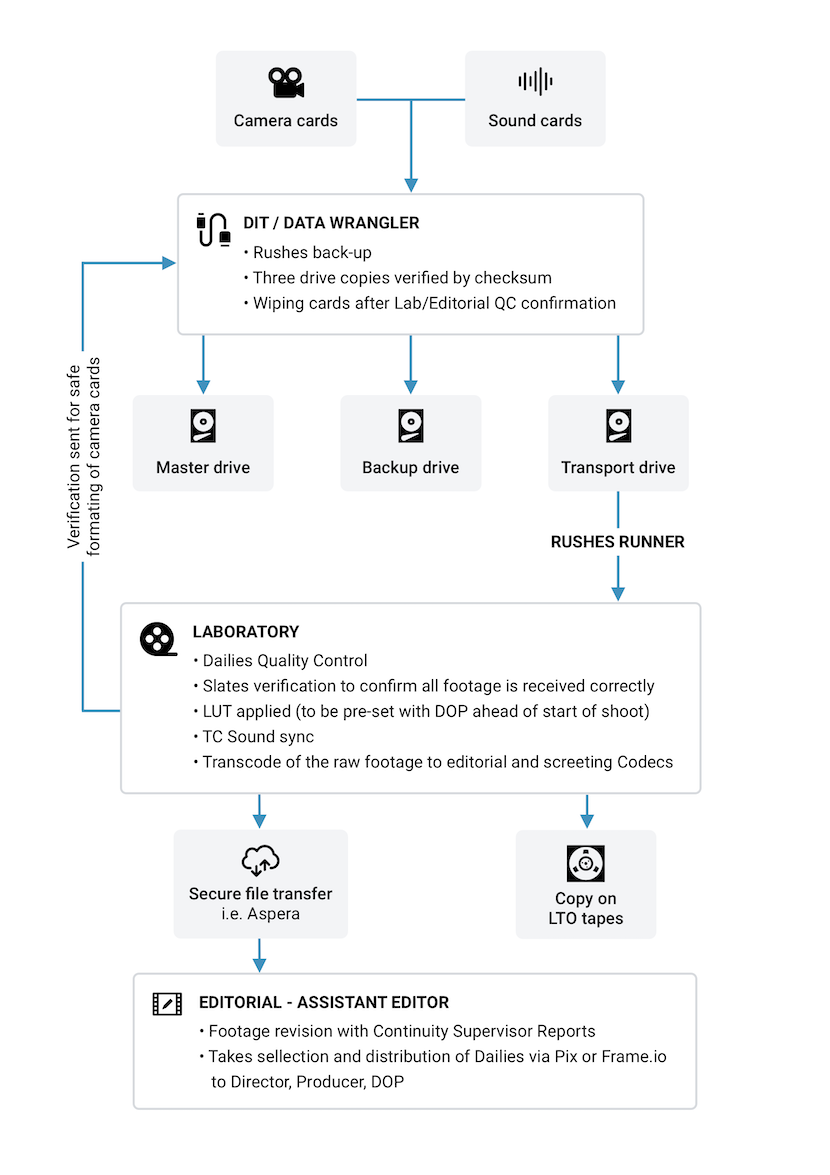